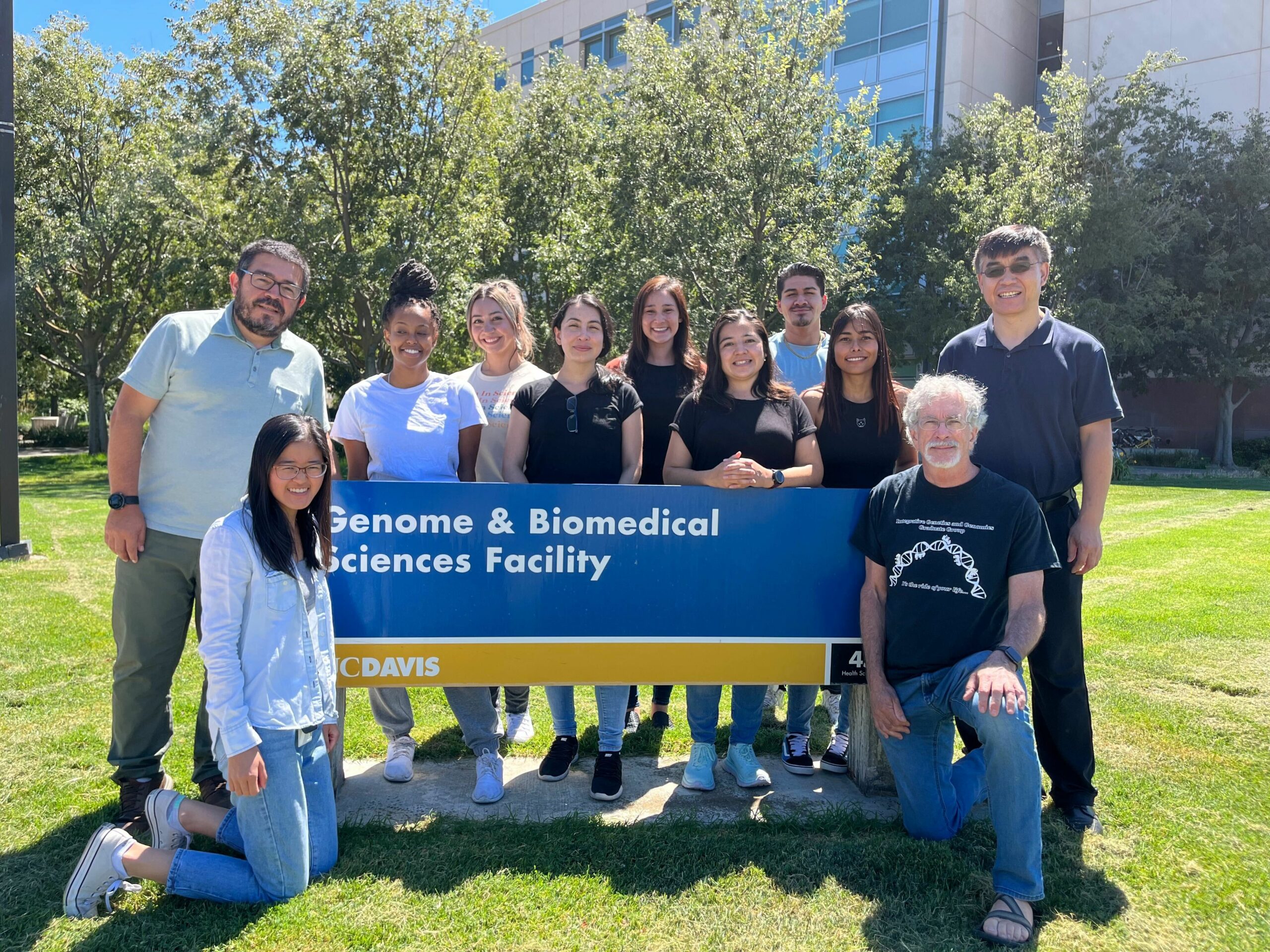 The Carvajal-Carmona laboratory uses a systems approach by applying several methods to studying human disease, including linkage analysis, candidate gene and genome-wide association studies, admixture mapping, germline and tumor sequencing, and a number of “omics” technologies. The lab also carries out functional genomics and pre-clinical studies of targeted therapies in patient-derived cancer models. Our research studies are highly collaborative and draw expertise from numerous fields including genetics, statistics, epidemiology, bioinformatics, functional genomics, and drug efficacy testing. The lab collaborates with the UC Davis Comprehensive Cancer Center in addition to various groups throughout the United States, Europe, and the Americas.

Below we present brief descriptions of our ongoing research areas.

Gastric cancer is the second most common cause of cancer death worldwide, with >720,000 dying due to this malignancy each year. The incidence of gastric cancer varies across populations, with the highest incidence reported in Asia and Latin America. Currently, the National Cancer Institute is funding two of our main projects on gastric cancer genetics.

Focusing on minority patients, both projects concentrate on identifying new familial forms of gastric cancer and characterizing the somatic mutations on tumors. Our study on germline gastric cancer genetics, involves an international collaboration carrying out whole exome sequencing of >500 patients with gastric cancer who have been diagnosed with malignancy at early age (<50y) or who report first-degree relatives with cancer.This effort builds on our discovery of patients and families with germline mutations in homologous recombination genes such as PALB2, BRCA2 and RAD51C. Our second initiative involves the genome-wide analyses of ~300 gastric tumors resected from patients of Latino ancestry. Gastric cancer is the leading cause of incidence and mortality disparities in Latinos, but there is limited tumor genetic data that facilitate novel precision medicine application. To fill this research gap, our group is collaborating with several colleagues in the U.S., Mexico, Colombia and Chile, who have already characterized cohorts of Latino patients with this cancer. Finally, with R21 funding from the NCI, we recently completed the analyses of intra-tumor heterogeneity (ITH) in >120 tumor biopsies from 33 gastric cancer patients using multi-regional targeted sequencing. These analyses uncovered extensive ITH and have provided important implications in our understanding tumor evolution and response to therapy.

The genetics of breast cancer in Latinos

Breast cancer is the most common malignancy in women and about a third of the variation in risk is accounted by a genetic predisposition. Our studies aimed at identifying novel causes of breast cancer using genetic analyses. Interestingly, the risk of disease, as well as the way in which cancer presents, \varies between populations. For example, women from Latino ancestry (Latinas) tend to present with breast cancer at much earlier ages and later tumor stages, when compared to other ethnic groups, and generally have worse prognoses. Previous studies showed that the risk of breast cancer in Latinas is associated with a higher European ancestry and our group has contributed to the identification of genes that increase breast cancer risk in the population.

Our breast cancer genetic studies involve collaborations with Latin America and with scientists and clinicians from UCSF, UC Davis and City of Hope. These studies have received funding from GSK Oncology, the V Foundation, and the California Initiative to Advance Precision Medicine. Key findings of our efforts in breast cancer research include the identification of novel genes, the characterization of founder mutations, and the development of polygenic risk prediction models

Unraveling the genetics of thyroid cancer

Thyroid cancer is the most common endocrine malignancy and accounts for ~2% of all diagnosed cancers in the U.S. Additionally, it is three times more common in women than in men. In American women, it is the 4th most prevalent form of cancer and the 6th most commonly diagnosed malignancy. The incidence of throid cancer is increasing at a very fast rate, at 4.5% per year. Among common malignancies, thyroid cancer has the strongest familial risk and thus, is highly amenable for gene mapping studies. In order to establish personalized medical programs for thyroid cancer and to discover target pathways for therapeutic development, it is crucial to identify thyroid cancer genes.

One of the long-term aims of our group has been to work in this unique cancer genetics niche. Our thyroid cancer studies involve: i) Identification of susceptibility variants using targeted sequencing, ii) Investigation of associations between genetic ancestry and cancer risk in Latinos, iii) Identification of new high and moderate penetrance loci using exome sequencing in familial cases, and iv) the characterization of somatic mutations in tumors from Latino patients.

Gastric cancer and liver cancer are leading causes of cancer incidence, mortality and survival disparities in the largest and fastest growing U.S. minorities, Hispanic/Latino Americans (HLAs) and in Asian Americans, Native Hawaiians and Pacific Islanders (AANHPIs). When compared to non-Hispanics whites (NHW), gastric and liver cancer incidence and mortality is ~>2-fold higher in HLAs and AANHPI. These two malignancies are, therefore, leading causes of cancer health disparities in the country. Despite representing leading causes of mortality and representing tumor types with high numbers of “druggable” mutations, only four targeted therapies for these two tumor types have been approved by the FDA this far. Another important gap in gastric and liver cancer research is that very limited cancer genome data from HLA/AANHPI gastric and liver tumors exist. The lack of data limits target identification and the development of precision medicine in these two minority populations. Published data by other groups as well as our unpublished analyses, suggests that the source groups of HLA (Latin Americans) and AANHPI (Asians) have different molecular profiles from NHWs which could affect precision medicine strategies in U.S. minorities. Funded by our minority patient-derived xenograft (PDX) center , this project concentrates on developing a body of genomic, pre-clinical and mechanistic data that will help address cancer health disparities in minorities.

A functional genomics platform for elucidating mechanisms of cancer risk

In the past decade, Genome-Wide Association Studies (GWAS) have identified a large number of genomic variants, specifically single nucleotide polymorphisms (SNPs) associated with increased cancer risk. The molecular mechanisms underlying the vast majority of these associations remain largely unknown. In parallel, the diminishing cost of next-generation sequencing (NGS) has led to a rapid expansion in whole-genome, whole-exome and multi-gene panel sequencing of clinical populations. Novel variants of uncertain significance (VUSs) in moderate-to-high penetrance cancer driver genes are being identified with increasing frequency. However, without functional data for these variants, there are few actions that can be taken to inform patient care. In both cases, cellular models containing the variant of interest could be a crucial tool in establishing disease-relevant function and beginning the path towards application in precision medicine. CRISPR/Cas9 gene editing has provided a convenient and flexible method for creating isogenic cell lines, which would, in principle, differ by only one engineered variant. Our lab has developed and published a novel pipeline to generate scarlessly edited cell lines for the downstream functional testing of a precise variant of interest. Our pipeline takes advantage of CRISPR/Cas9 Homology-Directed Repair (HDR) and KASP (Kompetitive Allele Specific PCR, LGC Group) genotyping technology to edit, identify and isolate isogenic cell lines without the use of selection markers. We have utilized this platform to model and functionally characterize GWAS-identified risk SNPs, such as rs6983267, a multi-cancer risk SNP located within a predicted MYC enhancer, as well as VUSs discovered in our population sequencing studies, such as two novel VUSs discovered in the PALB2 gene in a Latin American gastric cancer patient cohort. Currently, we have a number of on-going studies that are applying this pipeline to address cancer health disparities in gastric cancer, liver cancer, colorectal cancer and multiple myeloma. We are developing new cellular models derived from minority populations in which we can assess risk variant function on ethnicity-specific backgrounds.

Cancer and Population genetics in Latinos

Hispanic/Latinos are individuals with high cultural and genetic diversity and are exposed to a variety of environmental factors related to social or economic disadvantages. The genetic diversity resulting from the admixture of the funder populations in the Americas with immigrants from other continents has resulted in three predominant continental ancestries: Amerindian, European as a result of colonization, and African as a result of slave transport from West Africa. The proportion of genetic ancestry varies among and within ethnic groups from different countries in Latin America and in US Hispanic/Latino populations. The ethnic and racial heterogeneity can, therefore, be related to the risk of diseases including cancer.

In the Carvajal-Carmona Lab, we are interested in the characterization of the Latino population by using standardized interviews and estimating the ancestry by using mtDNA, Y-chromosome haplotypes, AIMs, and genome-wide genotyping data. Thanks to the collaboration with research groups in Latin America, we have access to more than 3000 healthy controls from Colombia and Mexico, and more than 7000 cancer cases from Colombia, Mexico, Argentina, Chile, and Uruguay. This gives us the opportunity to have a better approach to identify population diversity and stratification to identify candidate regions or variants by using Genome-wide association studies (GWASs), exome sequencing, as well as, the validation of known variants/mutations, reported in European and Asian populations.